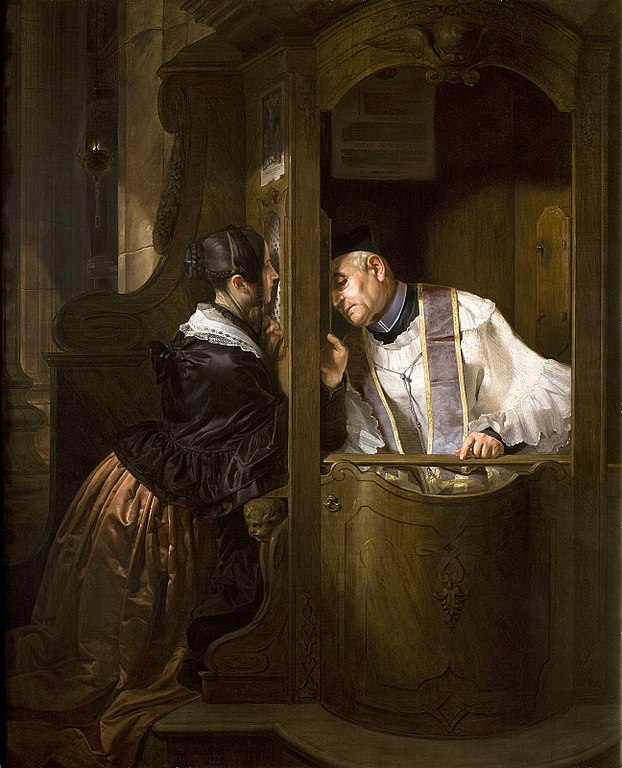 The history of confession, along with the penance and absolution it achieves in the mind of the believer, is rooted in the Judeo-Christian tradition. Exodus chapter 21, which immediately follows the Ten Commandments, gives priests authority to adjudicate cases of wrongful death, with the power to set a compensation price on the value of a life. In this tribal desert setting, the priesthood held the rights and duties of the State’s interest in administration of law over life and death matters, inheritance, crimes and punishments.

By the Christian era, the Roman authority and law code had become the State’s interest, with permission given to local religious bodies for adjudication of cases, but not capital punishment or judgments against Roman citizens. However, the path to absolution from sin, redemption and salvation in the Christian faith was through open confession and penance as evidence for repentance. The early congregations had religious authority to expel members from the congregation for gross sins (1 Cor 5) or to re-instate them on the basis of being “grieved into repentance.”1

By the Council of Nicaea in 325 AD, Canon 13 gave priests of the church the power to absolve sins at a death-bed confession and change the penitent’s outcome from damnation to salvation. In 459 AD Pope Leo’s “Magna indignatione” gave priests sufficient power to determine penance to be rendered for sins privately confessed, according to the conscience solely of the priest, who kept the sins secret. Over the next 1000 years, this arrangement lead to corruptions of indulgences by payment, which enriched the clergy, since priests had power to convert damnation into salvation for land, money, jewels or other valued possessions, which would be useless for the penitent in the fires of hell.

Following the Norman conquest of Britain the Roman Church exercised control over civil powers of Europe, with bishops manning the King’s courts.2 Following the Reformation, civil governments began to take back the power of the clergy and to limit the authority of the church. After 1750 the Jesuits were expelled from many European countries and civil authorities took control of most aspect of organized society. For example, The British Parliament passed the “Murder Act” in 1752 with specifications for adjudication. The “Offences Against the Person Act” of 1828 codified somewhat earlier laws on sexual assault. Penetration of a girl under the age of 10 was punishable by death, whereas age 10 to 12 specified a misdemeanor with a term of hard labor. Proof of ejaculation was replaced by proof of penetration, making convictions easier for the victims. Thus civil authority dealt increasingly with crimes of sexual abuse, while clergy were limited to spiritual steps to absolution for the perpetrators.

Which Clergy or Religions are included?

In the United States, the first Amendment to the Constitution protected religious rights of belief and largely of practice. In 1813, Catholic priests were exempted from compelled testimony on their knowledge of confessed crimes, thus establishing the legal precedent for an exception privilege to reporting.3 In 1817, the compulsory and sacramental nature of confession in the Catholic religion was granted the privilege by reference, but denied to the Protestant churches, where confession is not a sacrament and the minister is merely a spiritual advisor, with optional confession of sin without the power to absolve guilt by a specification of penance.4

Granting the privilege on the basis of Catholic affiliation alone was gradually replaced by legislation in every state broadening the exception to clergy of any religion, with certain underlying circumstances.5 States vary in their specifications for the relationship. Some make the sacramental nature of confession necessary, whereas others allow a broader relationship to clergy as merely a spiritual advisor.

In California, the Evidence Code specifies that, “penitential communication means a communication made in confidence, in the presence of no third person so far as the penitent is aware, to a member of the clergy who, in the course of the discipline or practice of the clergy member’s church, denomination, or organization, is authorized or accustomed to hear those communications and, under the discipline or tenets of his or her church, denomination, or organization, has a duty to keep those communications secret.”6 Therefore, ecclesiastical bodies that conduct internal judicial hearings that receive evidence by committee violate this one-to-one secret confession, which must not be divulged to others.

One suggestion for reform to narrow the California privilege is to “Limit penitent communication to confidential communication in accordance with the tenets, customs, or practices of a church, religious denomination that make it non-optional, and that is only between a penitent and a clergy member who has a duty to the penitent to keep all communications secret.”7

Further, the over-riding interest of the State should be to protect victims from risk of further abuse, or to designate the abuser as a danger to children. One practice implemented in Victoria Province of Australia, following the December 2017, “Royal Commission into Institutional Responses to Child Sexual Abuse”8 is to require all persons working with children in an institutional setting to receive training, a police background check, and card-carrying certification for “Working with Children.”9

Since 2011, a Federal standard for mandatory reporting of child sex abuse has been embodied in Senator Robert Casey’s “Speak Up” Act for child protection10 and would include as mandatory reporters, “Clergy, including Christian Science practitioners, except where prohibited on account of clergy-penitent privilege.” This privilege needs a better, narrowed specification by law.

Conclusion: History and current law embed a privileged exception for a type of confidential confession, exercising the believer’s right in a pathway to redemption and absolution of the sin of child sex abuse. This right and Canon Law should be respected, but only if the victim is safe from further abuse, and the abuser is tracked and restricted in access to new victim populations. The crime of abuse belongs to the state, while absolution from sin is part of protected religious belief. The nature of sex abuse is that perpetrators train and groom new child victims through protections obtained from an institutional structure. Reform for Child Safety to Stop Abuse must narrow and limit the clergy-penitent privilege of exclusion from mandatory reporting to child protection authorities.